2022 was not the easiest year for the cryptocurrency industry, with major players collapsing and most currencies experiencing heavy depreciation. But is it time to give up on crypto altogether? Maybe not quite yet. Let’s take a closer look at what happened in 2022 and try to analyze what the future of the industry might look like.

What happened in the crypto industry in 2022?

During 2022 the crypto market has fallen over 60% in value since its peak in November 2021. The industry, once valued at around $3 trillion, now has a total market capitalization of only around $900 billion. The Bitcoin price fell from its peak of around $69,000 to as low as $16,000. But is this a reason to feel pessimistic about the future of cryptocurrency? Definitely not.

It is important to remember that cryptocurrency is no stranger to boom and bust cycles. For instance, in 2018, after a meteoric rise to $20,000, Bitcoin fell 84% to $3000, and just a little over two years later, it was worth around $63,000. Financial experts say that in volatile markets, corrections are normal and should not be taken as signs of an imminent crash. 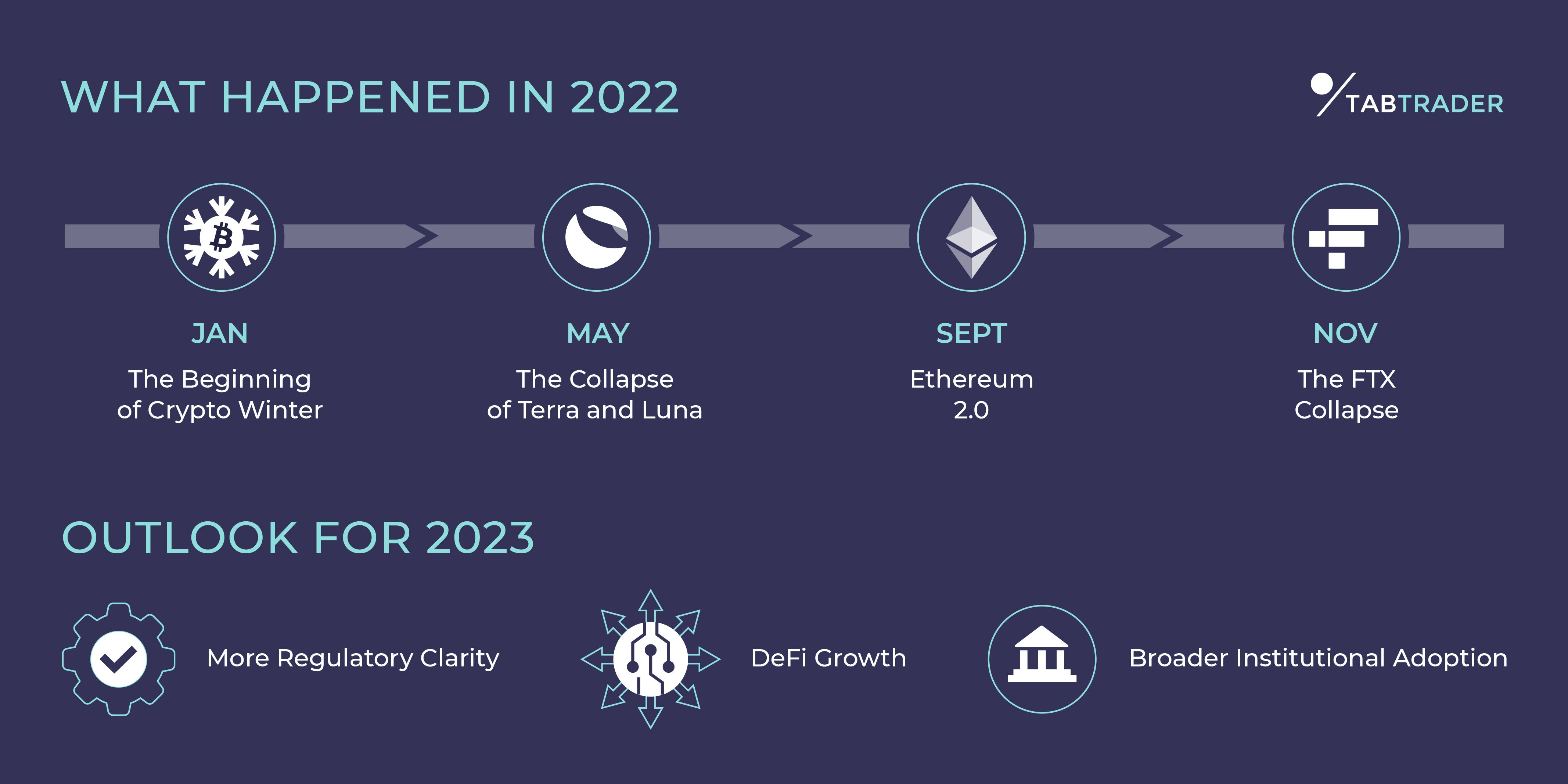 The Beginning of Crypto Winter

In late 2021 and early 2022, as central banks around the world began to raise interest rates and inflation increased due to political and economic instability, investors started to pull money out of high-risk investments such as cryptocurrencies, which unsurprisingly led to a sharp decline in the cryptocurrency’s market cap. By the end of the first quarter of 2022, the total value of the cryptocurrency market had fallen by around a third from its all-time high of $3 trillion, seen in mid-November 2021.

The Collapse of Terra and Luna

In early May 2022, the crisis in the industry went from bad to worse when one of the prominent algorithmic stablecoins, TerraUSD (known by the ticker UST,) lost its peg to the U.S. Dollar and wiped out the support of its non-stable companion coin Luna (known by the ticker LUNA).

Some are blaming the collapse of UST and LUNA on a large entity that may have dumped billions of UST into the market and caused UST’s peg to break. Others think that algorithmic stablecoins were born to fail because their stability depends heavily on consistent market demand.

The Luna/TerraUST collapse wiped an estimated half a trillion USD from the cryptocurrency markets, leaving investors across the globe stunned and panicked.

Despite all the hardships, the crypto industry was not without positive developments in 2022. The long-anticipated switch to Ethereum 2.0 happened on September 15, 2022, ushering in a new era of improved security, scalability, cost-effectiveness, and environmental friendliness to blockchain transactions.

In mid-November 2022, crypto enthusiasts were once again shaken to their core by yet another unexpected turn of events — the sudden collapse of the third-largest centralized cryptocurrency exchange FTX. FTX went from being worth $32 billion to bankruptcy in a matter of days.

As it turned out, FTX has been using its client’s funds to finance risky trading bets for its sister company, Alameda Research. After Coindesk published a report highlighting FTX’s possible liquidity and solvency problems, FTX faced a surge of customer withdrawals that it was not able to keep up with.

Following the collapse, the crypto market fell below $1 trillion in value. Sam Bankman-Fried, the founder of FTX, currently, as of mid-December 2022, is in the custody of Bahamian police facing criminal charges. Here is our detailed breakdown of what happened to FTX.

Despite the bear market that has engulfed the industry in 2022 the outlook for crypto remains positive as the underlying technology and potential use cases continue to grow and evolve. In 2023 we can likely anticipate the crypto industry to progress in the following areas.

The collapses in the industry in 2022 have prompted lawmakers around the world to take a stronger stance on regulating cryptocurrency. In 2023 we can expect to see more countries establish clearer regulatory frameworks for the industry.

Decentralized finance (DeFi) is expected to continue to grow in popularity and use. After the failures of centralized entities in the cryptocurrency industry in 2022, Defi will likely become increasingly more attractive for those seeking greater transparency and security in their financial transactions.

Unlike CeFi platforms that rely on a centralized authority to oversee transactions and enforce rules, DeFi platforms are built with an entirely decentralized architecture and use smart contracts (self-executing pieces of code stored on a blockchain) to manage platform operation. This means that on DeFi platforms, users don’t need to trust a central authority with their funds but instead rely on code that is, as a rule, open-source and audited.

Cryptocurrency is a revolutionary technology. It allows for a secure, trustless, and decentralized way to perform financial transactions and is ideally completely free of control from third parties. No wonder that with each passing year, cryptocurrency and blockchain are becoming increasingly prevalent in our lives.

In 2022, the crypto community faced a lot of challenges that have caused significant losses of value across the industry. However, this has not deterred the momentum behind its revolutionary technology, so the future remains bright for the industry as a whole.