How Does Elon Musk Affect the Cryptocurrency Market?

Elon Musk is one of the most influential people of our time and an outspoken proponent of cryptocurrency and blockchain technology. In this article, we look at Elon Musk's crypto timeline and analyze his impact on cryptocurrency over the past few years.

Who is Elon Musk?

Elon Musk is a South-African born American tech entrepreneur and investor, who has achieved global fame as the founder and chief executive of electric autos manufacturer Tesla and an aerospace company SpaceX. In 1998 Elon Musk also co-founded PayPal – a fintech company operating a well-known online payments platform. He was named the richest person in the world with an estimated net worth of $255 billion as of July 2022. Elon Musk is a major supporter of cryptocurrency and blockchain. Once in an interview he said that crypto is likely “the future currency of Earth”.

It is largely believed that Elon Musk has the power to single-handedly move cryptocurrency markets. To better understand Elon Musk’s relationship with cryptocurrency let’s have a look at the history.

On Nov. 22, 2017, an article titled “Elon Musk Probably Invented Bitcoin” was published on Medium. While he strongly denies the claim, Elon stays an avid supporter of Bitcoin to this day.

Elon Musk reportadely ventured into a committed crypto journey in 2019, when he mentioned on a podcast with ARK invest — an American investment management firm, that technology behind Bitcoin is “quite brilliant”. It was most likely around this time that Tesla and SpaceX CEO began to consider cryptocurrency as a potential component of his business models.

Along with achievements in entrepreneurship and technology Elon Musk is famously known for his endorsement of the first meme-inspired cryptocurrency — Dogecoin. Dogecoin is a dog-themed meme coin created in 2013 as a way to poke fun at the wild speculation in cryptocurrencies at the time.

After the first time Elon Musk tweeted about Dogecoin on April 2nd, 2019, stating, "Dogecoin might be my fav cryptocurrency. It’s pretty cool.", the price of the coin almost doubled in just two days. Since then, Musk has mentioned Dogecoin several more times in his twitter posts, and every time it caused significant swings in the cryptocurrency's price.

Despite its humorous nature, Dogecoin is currently considered a legitimate investment prospect largely due to Elon Musk’s support. Bitcoin back-and-forth On Feb. 8th, 2020 Tesla announced that it had bought $1.5 billion worth of Bitcoin and will be accepting the cryptocurrency as payment for its products. ​​ Shortly thereafter, the price of Bitcoin rose more than 10% and reached a new all-time high of around $58,000 at the time.

However, on May 12th Bitcoin’s building momentum came crashing down due to news from Elon’s personal Twitter account, reporting that Tesla is halting its acceptance of Bitcoin payments for car purchases due to environmental concerns associated with Bitcoin’s mining process. The price of Bitcoin dropped about 5% in the first minutes after Musk’s announcement and continued on the downward spiral in the weeks thereafter.

After signaling out the problem Elon Musk stated that he will be working to help make the Bitcoin mining process more environmentally friendly and that he has no plans to discontinue his support for the crypto industry.

In July 2022 Tesla announced that it had sold 75% of its Bitcoin holdings to maximize its cash position amid the uncertainty surrounding Covid shutdowns. The news, however, did not have a significant negative impact on Bitcoin’s price. 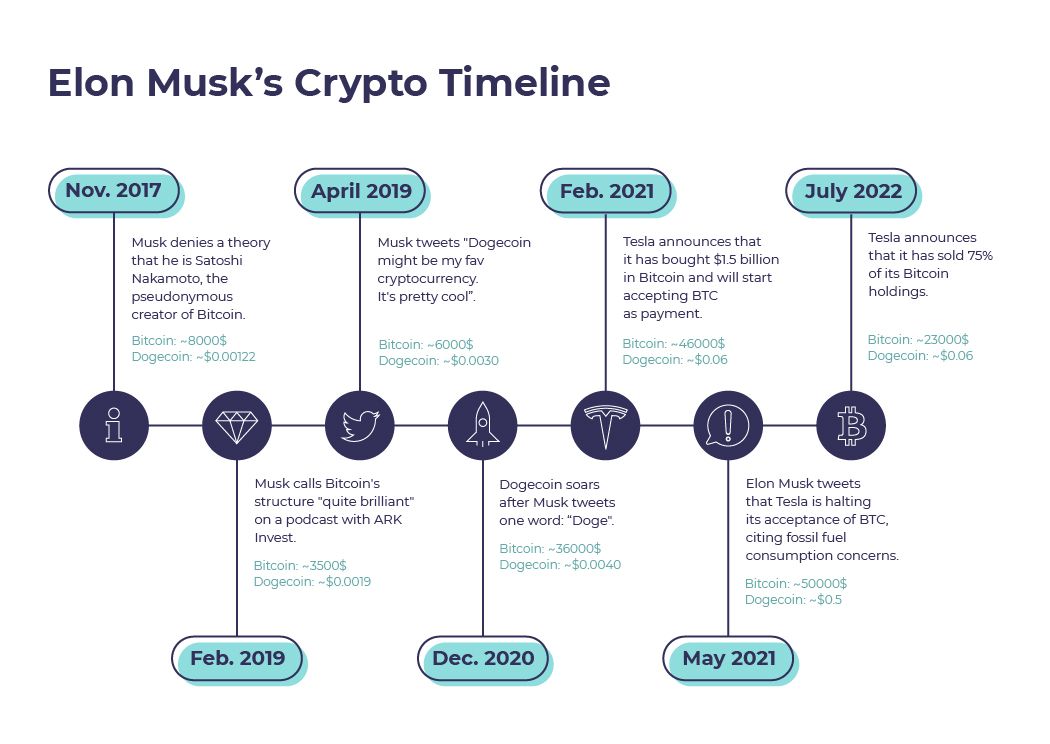 In addition to being one of the wealthiest mainstream businessmen in the world, Elon Musk is also a technology geek and a highly skilled programmer. His engineering background combined with a passion for the field led him to become one of the most significant crypto influencers to date.

While Elon Musk’s opinion is likely not the only thing impacting cryptocurrency prices, experience shows that his tweets can move markets and this power is currently unparalleled.