On the 2nd of December 2021 there was a TTT initial DEX offering that went haywire. Unfortunately, one of the launchpads didn’t stick to the agreed timeline for distribution schedule which ultimately led to mispricing of the token post-launch. We apologize for letting down speculative buyers of the token, who hoped to get a quick ROI. The pre-launch was successful and the project is still shaping nicely, especially relative to the broad market. Nothing has changed in terms of fundamentals for the project. TTT has a strong user base, top notch product and ambitious DeFi plans. More announcements about listings on DEXes and some of the top CEXes are coming in the near future.


TTT token was initially launched on the Solanium and Raydium launchpads. These launchpads promote projects to their existing users for approximately 1-2 weeks prior to the actual sale. They run a fixed price lottery model where a project allocates a certain amount of tokens and agrees to exchange them for a fixed amount of stablecoins on an agreed date and time. This model is beneficial to the projects and users because not everyone is a lottery winner, which generates unrealised demand leading to further price growth post-launch. This could be countered to the auction price model of startups like Mango or Parrot where they generally attract an order of magnitude larger committed capital, because everyone can participate and get an allocation in the project, however this limits the potential price growth.

TTT had a successful pre-launch campaign:


TTT agreed with Ryadium, Solanium, Gate.io and a market maker that they launch TTT at 4pm UTC on Serum and Gate.io, i.e that TTT token distribution would commence to Solanian, Radians and Gatians at 4pm UTC, as well as AMM on Serum and MM on Gate.io would be launched. However at 2:45 pm UTC we noticed that someone had started trading TTT on Serum. It turns out that one of the launchpads started distributing tokens to their users approximately 1 hour 15 minutes ahead of the agreed time. TTT team immediately interfered and asked them to stop the distribution, however 15% of tokens (1.5M TTT or 0.15% of total token supply) allocated to this launchpad had already been distributed. The first user who received the token earlier than they were supposed to, spun up his own market on Serum, selling their miniscule position of 50 TTT at $5 per token. This caused other users who also noticed the early start of trading to liquidate at $5 and make 50000% ROI. Moreover this was exacerbated by a very thin market, with low trading volumes without a market maker on the other side, causing a price slump that otherwise would not have happened because market makers would be on the other side of the trade. This huge red candle caused massive fear, and users who started receiving their tokens at the agreed upon time of 4pm UTC started fueling this negative dynamic and the price slump.

Expected price action post launch usually looks like this, as exemplified by the Defiland launch that was also out on both Raydium and Solanium a week before TTT: 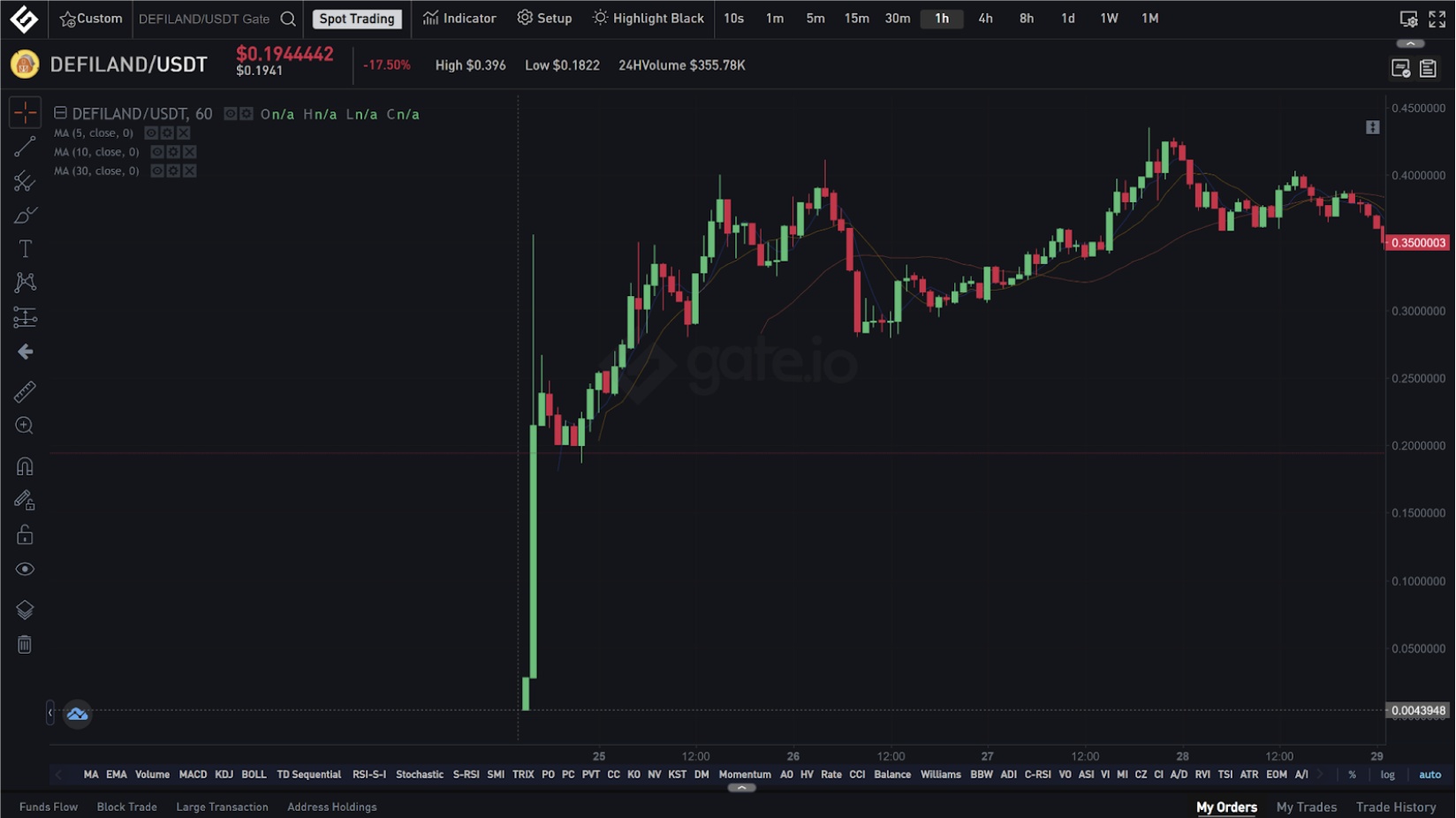 The first price action here is driven by FOMO buyers who didn’t win the lottery and still want to get in at a cheap price. The AMM and MM started the book at the same price as IDO, i.e $0.05. When this demand is satisfied both by organic sellers and market makers reserves, then mostly organic sellers who want to take profit come in and liquidate, causing a few red 1-hour candles. Then a wave of FOMO buyers jumps in, and the price discovery is thought to be complete within a 24-hour period.

TTT price discovery mechanism and market microstructure got screwed up. Trading started not at $0.1 IDO price, but at $5. Market makers on both CEX and DEX were not ready because they were scheduled to launch an hour later and configured to make markets around $0.1 per TTT. The seller was executing market orders eating off of a thin order book driving the price down from $5 to $1.51 when the other users couldn’t actually get their hands on their tokens. What exacerbated the problem even further was that this aforementioned launchpad didn't have a batch distribution system and was distributing one by one for the next several hours post launch. Users who have received their tokens could only observe a negative price action fueling their fear. 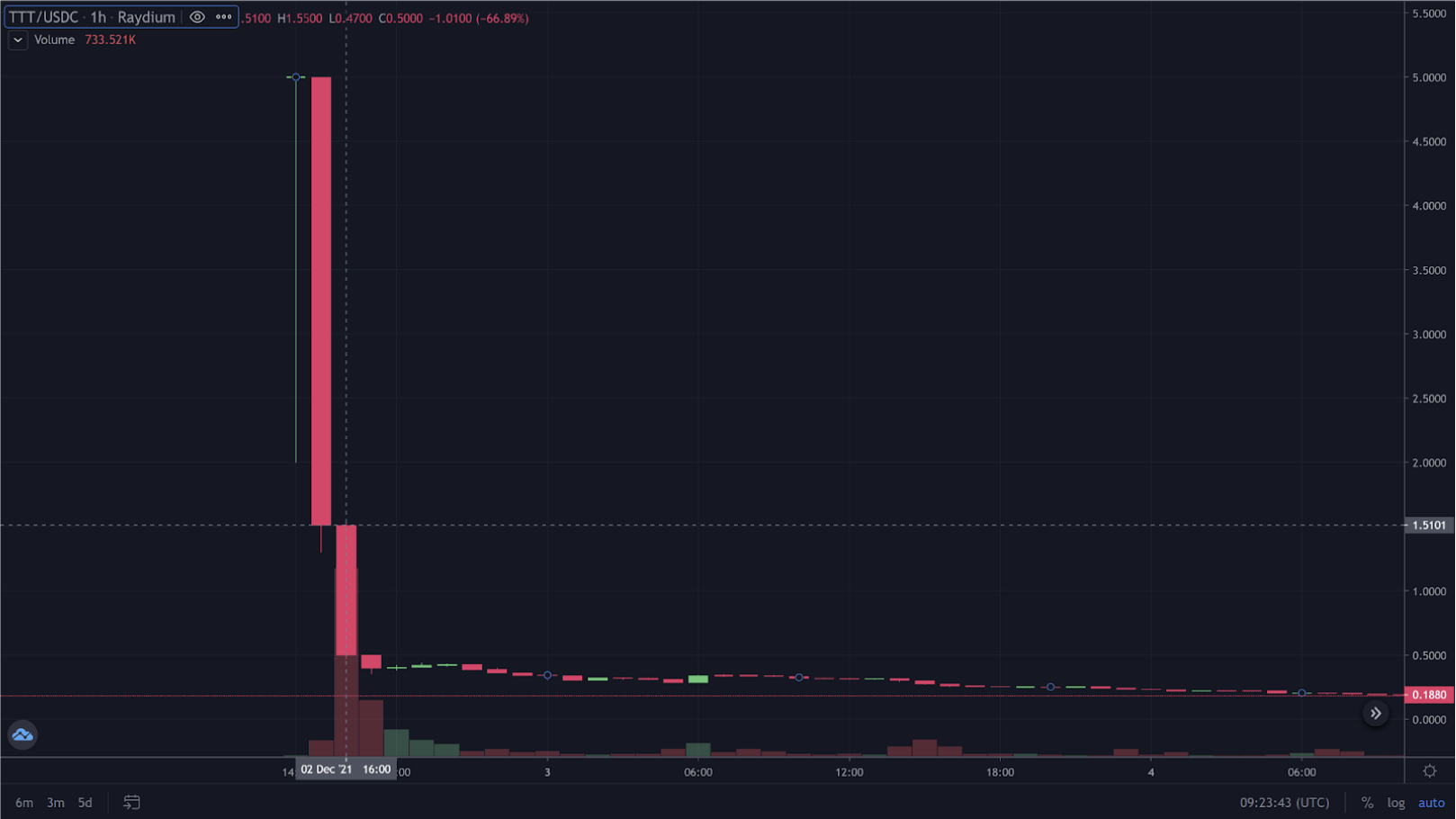 
The post launch fear driven market microstructure caused a 2X return to investors who expected 100x returns. Additionally, the broader market has also been in the red zone this day, further worsening the outlook for the token.
That said, the pool was seeded and given the strength of TTT prelaunch, gained strong liquidity very quickly even without a MM. Price and volume was strong early on Raydium and indeed on Gate.io despite listing 40+ minutes after the pool was seeded. The price has decreased now but considering the crash on Saturday, it is performing well relative to the market. Volumes are strong on Gate and TVL is strong on Raydium. Our traders are positive with where things are.