In this article, we give a simple yet thorough explanation of the most common chart patterns — one of the essential elements of technical analysis.

What is a Classical Chart Pattern?

Identifying a chart trend — its strength, along with support and resistance levels and possible reversal areas — is the key to successful trading.

Over time, analysts have noticed patterns when it comes to chart behvior: specific price action is often followed by an associated further move. Using this, they combined different trend line shapes and gave them easy-to-remember nicknames. The most popular common nicknames and patterns behind them are called classical chart patterns.

There can be bullish and bearish chart patterns; they usually mirror each other, so once you master a bullish trading pattern, you can easily switch to trading a similar bearish pattern.

How do Classical Chart Patterns Work?

A trader normally follows the charts by simply looking at them or drawing additional lines and figures that help forecast upcoming price moves. Classical chart patterns are the simplest trading patterns that are easy to spot and figure out — the best choice for beginners.

After a trader spots a specific pattern, they can make assumptions as to what is going to happen next. However, it is important to note that no chart pattern gives 100% certainty that the price will follow the rule.

First of all, let’s figure out how trends are determined using trend lines before analyzing the most popular chart patterns.

A trend line is simple in use — it is a line that a trader can draw between points on a chart. With two and more prices, one can input a line or a curve and have an idea of where the asset price is headed.

Trend lines are drawn above and below swing highs and lows respectively and show the price’s most likely trajectory. From just a glance at a trend line, a trader can quickly grasp the direction of a trend and its strength.

This is an example of an Uptrend Line:

and a Downtrend Line:

[pictures taken from the article: https://tabtrader.com/academy/articles/what-is-a-trendline]

If you are new to the concept of trend lines, we strongly recommend checking out our dedicated article on the topic at the TabTrader Academy.

This pattern usually shows that the current trend is going to continue.

It looks like a flag or a flagpole and happens after a sudden move against the trend, where the pole section is the sudden move and the flag section shows consolidation.

Pennants are another version of flags, but trend lines drawn to unite the highest and the lowest points meet at the area of consolidation and form something close to a triangle. Pennants also serve as an indicator that the trend is likely to continue. However, they cannot be considered strong indicators of upcoming movements and should be interpreted carefully according to the context in which the pattern occurs.

There are three major types of pennant: 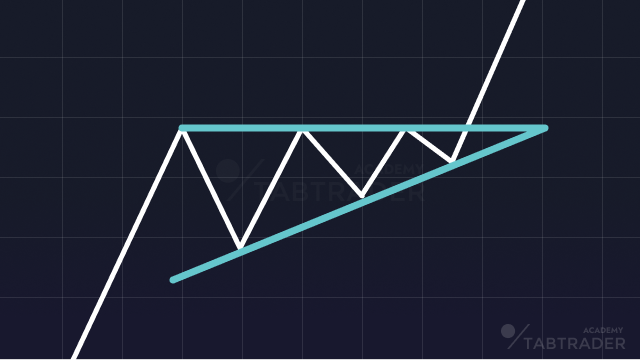 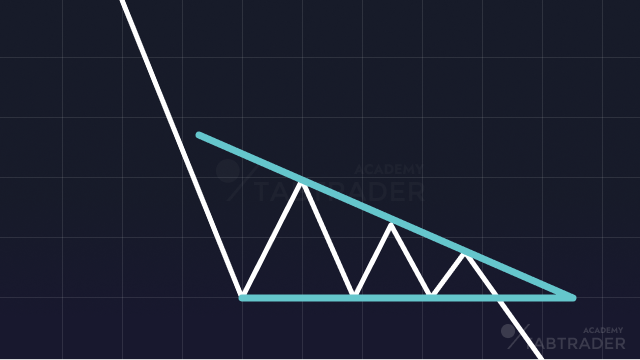 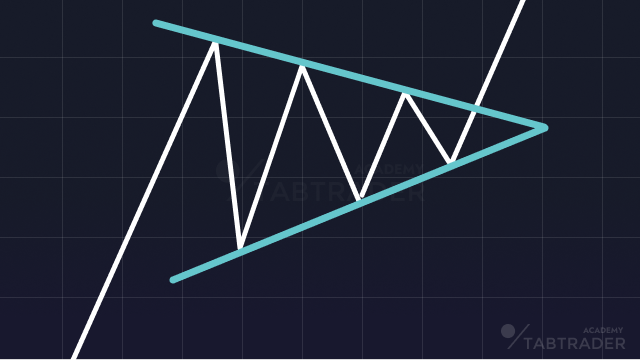 It occurs when the price repeatedly tests one trend line formed by its highs but keeps bouncing back to the other trend line formed by the lows. When these two trend lines converge in a wedge shape, the trend may be about to reverse. This pattern is often accompanied by lower volumes which overall shows that the trend is gradually losing strength.

Or bearish wedge, is a sign of an upcoming bearish reversal. It happens when an upward trend is losing strength and volume, becoming weaker and showing slower growth that may soon reverse into a downtrend.

Or bullish wedge, on the other hand, is a sign of an upcoming bullish reversal. It occurs when selling pressure weakens as buyers gain strength and are about to flip the status quo to an upward trend.

A double top is clearly visible as an M-shaped pattern. It is a bearish pattern which shows that the trend is about to reverse.

Usually, this goes as follows:

In this pattern, as well as in Double Top, the levels do not have to be completely equal if they more or less resemble the letters W and M respectively. 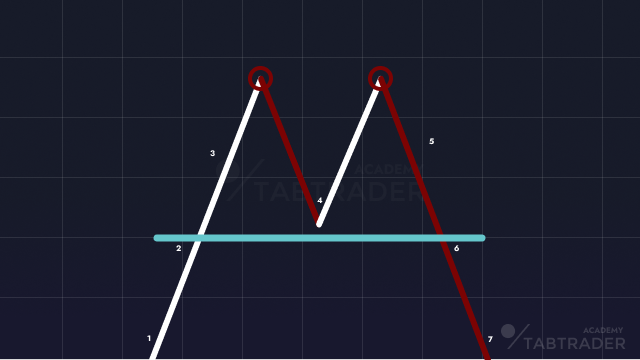 This type of pattern is an inverse double top pattern that shows an upcoming bullish trend.

It is W-shaped and generally plays out as follows:

The price retraces from the area marked (1) in the image below. It goes as low as the resistance zone (area 2), tests support (area 3) and bounces back (area 4). Then the asset attempts to fall through resistance once again (area 5), but bounces again (area 6) and goes higher, forming a bullish trend (area 7).

In this pattern, the levels also do not have to be completely equal if they more or less resemble the letter W. 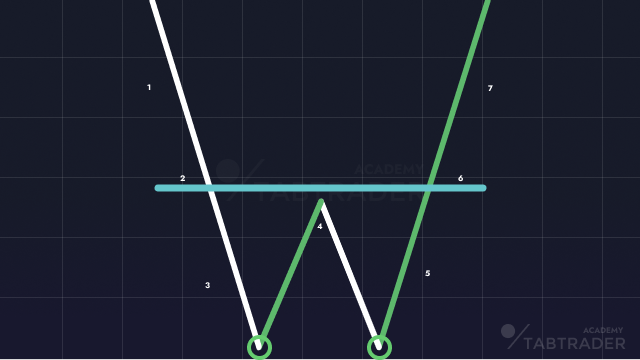 It occurs when the price rises from area 1 and successfully breaks through what is later defined as the neck level (area 2). After that, the asset price reaches its first peak (area 3), falls back to the neck level (area 4), then crawls up to the head (area 5) only to fall back to the neck again (area 6). At this point, it might be the best time to sell, even though the price then goes up and reaches the second shoulder (area 7). When the price returns to the neck level for the third time (area 8), it is a clear indicator that the trend has reversed into a bearish trend for some time (area 9). 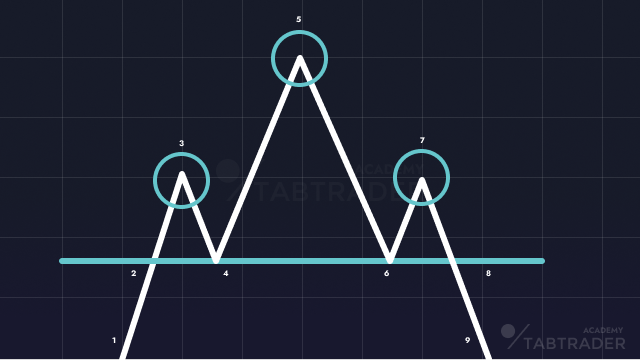 It occurs when the price moves down from area 1 and passes what is later called the neck level (area 2). Following that, the asset price reaches its first bottom (area 3), then rises a little back to the neck (area 4) and falls even lower to the head zone (area 5). After that, the asset price bounces and goes back up to the neck (area 6), then slowly returns to the shoulder level. This might be the best moment to buy, even though the price is going down, as after it reaches the second shoulder (area 7) and finally reverses, it only goes up from there.

Clear indication of a trend reversal is when the price reaches the neck level for the third time (area 8); starting from here, it continues higher. 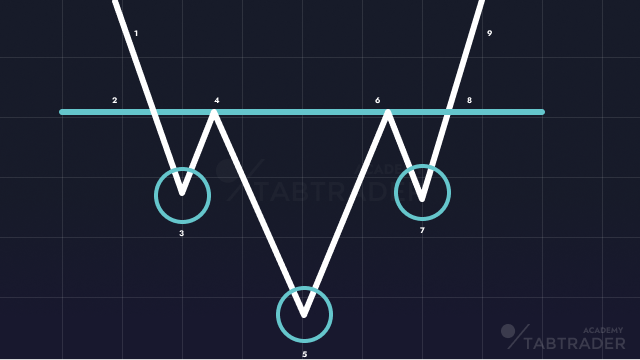 Chart patterns are some of the best-known and most widely used instruments of technical analysis favored by both beginners and seasoned traders alike. They are flexible and universal and can be applied even with little or no knowledge of the fundamental reasons behind asset price movement.

It is extremely important to remember that chart patterns should be used carefully. Even if you are sure about the pattern you see on a chart, it is still advisable to use risk management tools to cover your back, such as trailing stop orders (covered in another TabTrader Academy article here).

To share your queries and other feedback, send us an email at [email protected] or feel free to contact us via Telegram, Twitter or even Discord!

What are trading patterns?

A trading pattern, or chart pattern, is a figure formed by a selection of price points. When a trader draws a trend line following these prices, it may resemble a figure such as a triangle or human head and shoulders. Chart patterns are a fundamental part of technical analysis and can show when a trend is about to reverse or if price action is going to keep moving in a certain direction.

How to trade chart patterns

Likewise, it is also important to note that chart patterns give no guarantee that the price follows the predetermined route.

What is a bear flag pattern?

A bear flag pattern, also called a bearish flag, is a pattern that resembles a flag and happens after a short and sharp countertrend move where the pole section is the movement and the flag section shows further consolidation.

Bearish flags usually occur during a downtrend; they occur after a sudden upward move and are usually followed by a further slide into a bearish trend.