What Are Meme Coins?

Meme cryptocurrencies, or meme coins, are digital assets that are often based on popular internet memes and are known among other things for their highly volatile nature.

These cryptocurrencies are typically created as a form of satire or social experiment, and their value often comes from their perceived popularity or cultural significance — not their underlying technology or use case.

In this article, we will explore what meme coins are, how they work, and whether you should consider investing in them.

What are Meme Coins?

To qualify for the informal title of being a “meme coin”, however, as the name suggests, the coin meme should be its most distinguishing feature. This is certainly the case with Dogecoin, the mascot of which, the shiba inu dog, has become synonymous with the crypto industry as a whole, and even sparked new memes of its own.

What links Dogecoin to meme coins in general, however, is its high volatility, lack of implicit use case and value derived from social popularity rather than qualities such as its underlying technology or intrinsic value.

Crypto memes, and thus meme crypto coins come in all shapes and sizes. Some stand the test of time, while others fizzle quickly, nonetheless often achieving brief notoriety along the way.

How do Meme Coins Work?

Meme coins are technologically no different from some other “serious” cryptocurrencies, and their underlying mechanism can closely mimic those of well-known altcoins such as Ethereum and Litecoin.

Meme coins function, as other cryptos do, with the help of a blockchain, and some even piggyback off other networks. They share hashing algorithms, and some, such as Dogecoin, are even mineable.

As such, just because a coin has a well-known meme at its center, this does not mean that its technical composition is strictly any different from regular cryptocurrencies.

The Most Famous Meme Coins

There are many different meme coins, but some of the most famous include the aforementioned Dogecoin, as well as Shiba Inu (SHIB) and Safemoon (SAFEMOON).

By definition, meme coins are accompanied by viral memes which might not always endure as social phenomena. As such, it can be the case that a coin meme is a household name one day, and practically forgotten the next.

As of early 2023, spin-offs (at least in meme theme) of Dogecoin remain in vogue, and the majority of the biggest market cap tokens are in some way reminiscent of DOGE.

Dogecoin is perhaps still the best-known meme coin. It was created in 2013 as a parody of the growing popularity of cryptocurrencies, and it was based on the popular Doge meme, which features a Shiba Inu dog with broken English captions.

Despite its origins as a joke, Dogecoin has grown to become a popular cryptocurrency with a market capitalization of over $10 billion. Its enduring popularity received a recent, albeit unlikely, helping hand from Tesla and Twitter CEO Elon Musk in 2020, an informal alliance which has continued, you can read the TabTrader Blog article on how Elon Musk affect the crypto market.

Indeed, so entrenched is Dogecoin within cryptocurrency as a whole that even individual aspects of its “brand” — not least the English style and Doge mascot — have become crypto memes in their own right. 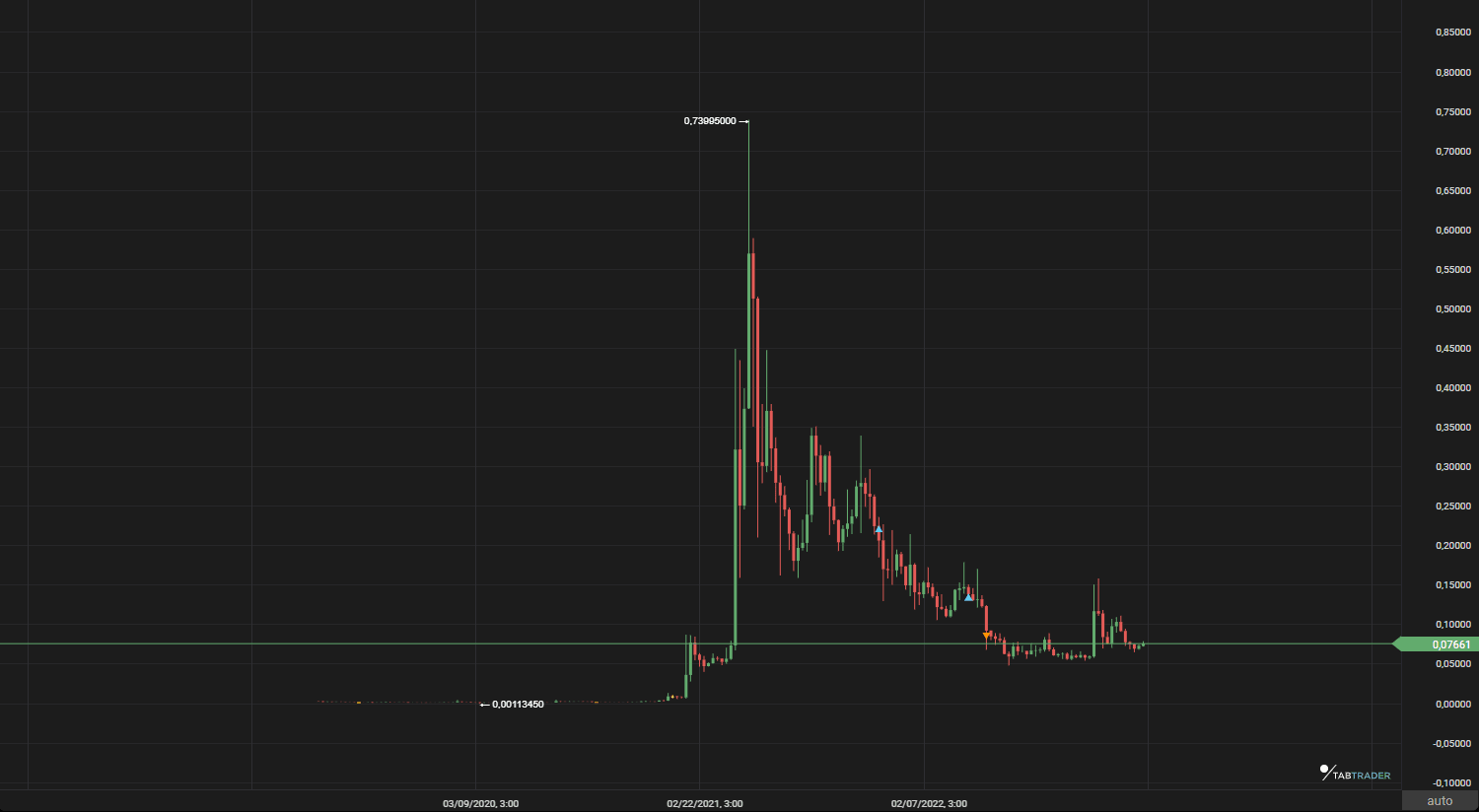 Shiba Inu is a meme coin that was created in 2021 as a parody — should one even be necessary — of Dogecoin. It is based on the same Doge meme, but attempts to offer different features, notably by being an ERC-20 token on the Ethereum blockchain. Its developer, known as Ryoshi, released SHIB in August 2020. Its website even describes it as the “Dogecoin killer”. Shiba Inu has grown quickly in popularity and as of January 2023 has a market capitalization of over $5 billion. 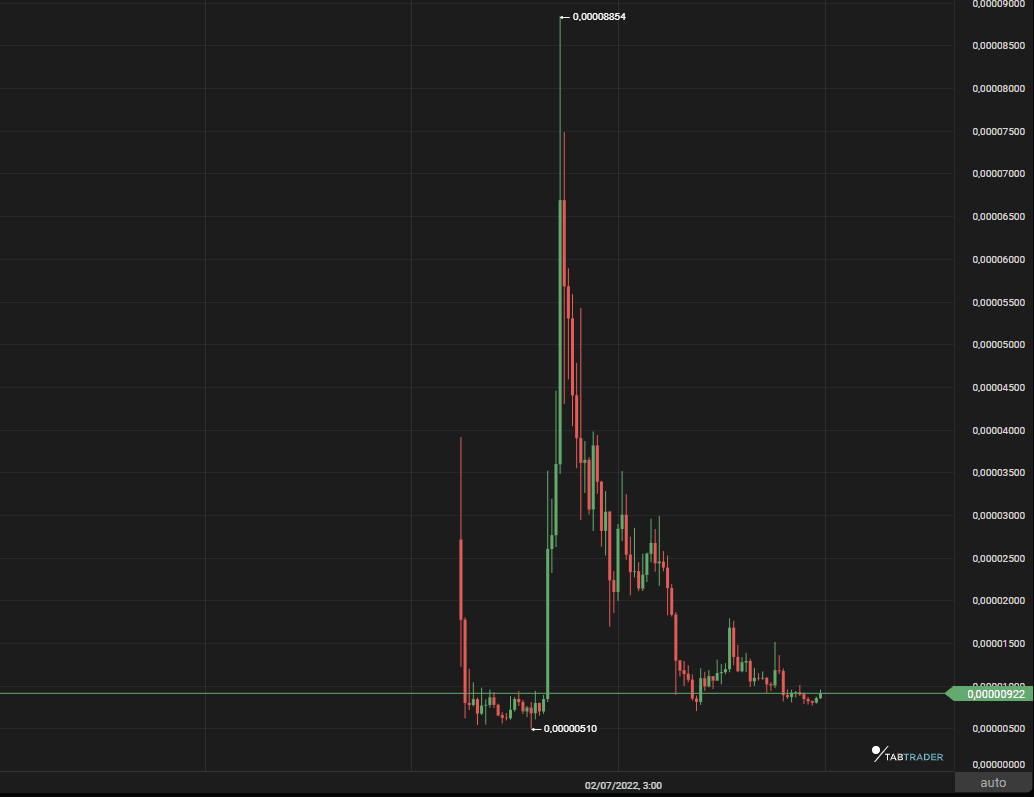 Elon Musk, the CEO of SpaceX, Tesla and Twitter, has become known for his tweets about meme coins, particularly Dogecoin. His tweets have been credited with boosting the price of Dogecoin and making it more mainstream, much to the excitement of existing DOGE token holders.

Conversely, his endorsement has attracted considerable criticism, notably claims that Dogecoin will figure as an important financial instrument in the future despite its lack of technological fundamentals. Critics have argued that Musk has encouraged people to buy DOGE without due diligence, taking his praise of the meme coin as a guarantee of financial returns.

As with any investment, there are risks involved with investing in meme coins. These cryptocurrencies are highly volatile and their value can fluctuate wildly, which means that you could potentially lose all of your investment within a short period. Additionally, because many meme coins are created as jokes or social experiments, they may not have the same level of security or reliability as more established cryptocurrencies, notably Bitcoin.

Given their “joke” nature, it is arguably more likely that meme coins will attract bad actors or scam developers who will “rug pull” once the token’s value hits a certain point.

Should You Invest In Meme Coins?

Whether or not you should invest in meme coins is a decision that ultimately depends on your own risk tolerance and investment goals. Those looking for a high-risk, highly volatile investment could well find it in meme coins, but their inherent unpredictability makes large allocations ill advised.

For beginner traders or those wishing to increase their crypto exposure, a reputable alternative such as Bitcoin or Ethereum minimizes the risk — as far as is possible in the crypto world — of financial loss.

Meme coins are cryptocurrencies like Bitcoin or Ethereum whose identity is based on a popular meme or cultural phenomenon. While technologically often similar to other cryptocurrencies, meme coins tend to only exist for the sake of their underlying crypto meme. They lack a true use case beyond this, and often come and go in line with the popularity of their mascot.

Just like many cryptocurrencies, meme coins can be highly volatile, and are as such not suitable as investment targets for those seeking to make large allocations into crypto.

TabTrader has all the tools traders need to reduce risk and keep track of their crypto positions in one place. Whether at home or on the go, the TabTrader app for Android, iOS and Web helps both beginners and seasoned professional traders navigate the wild world of crypto. Download the app here.

Want to know more about Bitcoin, altcoins and other aspects of crypto trading? Check out the other articles at the TabTrader Academy.