What Are Bull Flag and Bear Flag Patterns?

The Definition of a Flag Pattern

A flag is a technical analysis chart pattern that consists of a sharp directional price move (flag pole) followed by a slower counter-trend or sideways price action (flag) occurring between two trendlines (support and resistance). The pattern derives its name from its visual resemblance to a flag on a pole. 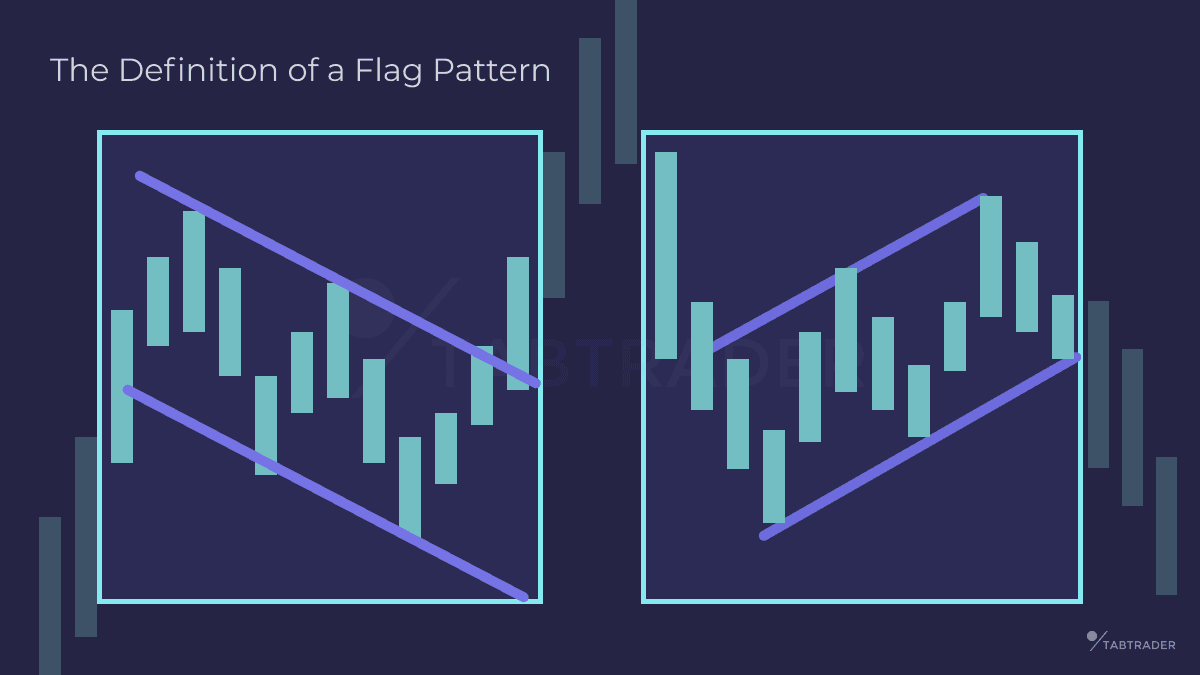 A flag is usually considered a continuation pattern, meaning that the asset price is expected to continue in the direction of the original trend after the pattern is completed. A point at which the price breaches one of the trendlines is referred to as a breakout point and can often be seen as a signal to enter a trade. Below is a breakdown of the anatomy of a flag pattern.

Anatomy of a Flag Pattern

The anatomy of a flag chart pattern is composed of four distinct parts:

What Is a Bull Flag Pattern?

A bullish flag pattern is formed when the price rises during the initial trend and then slowly declines or moves sideways in the consolidation area. This pattern is considered a bullish signal since it suggests that the uptrend will continue after the pattern is complete.

What Is a Bear Flag Pattern? 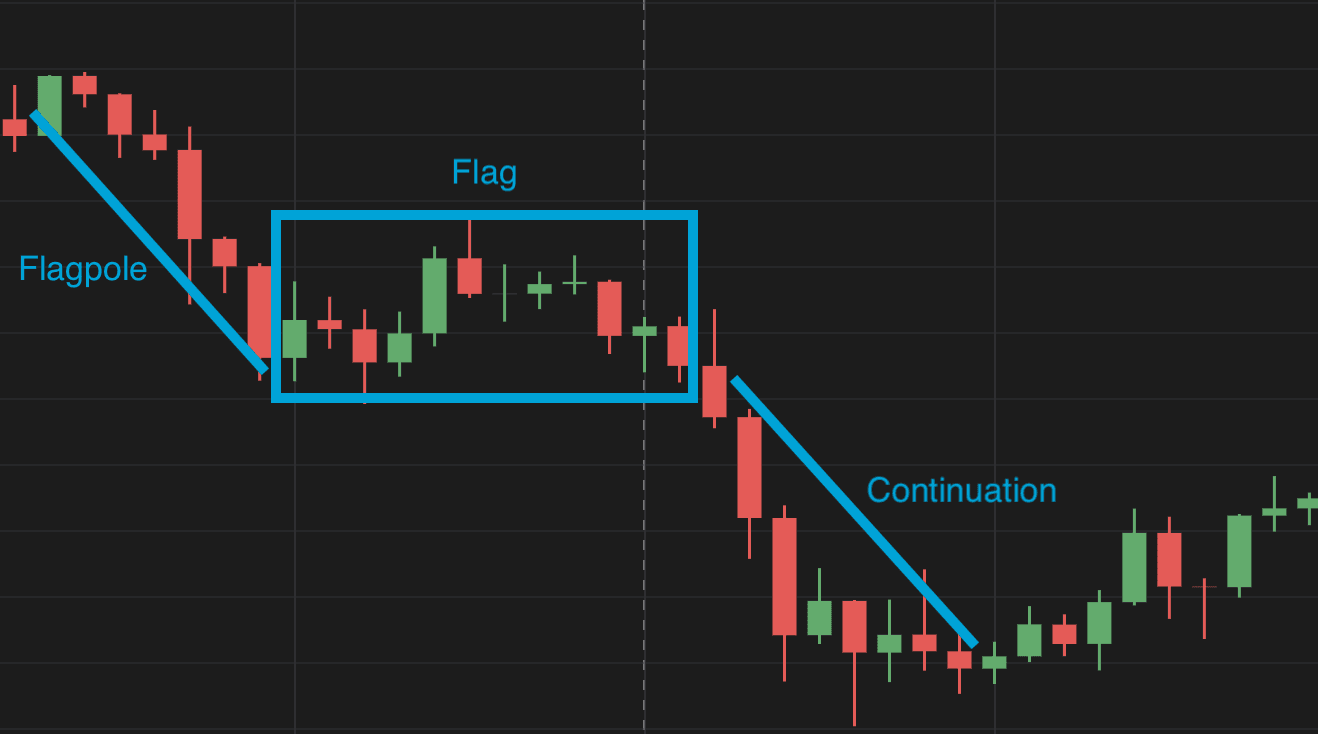 How to Trade Flag patterns?

For any flag pattern, it is generally recommended to enter a trade a few time periods after the initial breakout to help reduce the risk of a false signal.

How to Trade Bull Flag Patterns?

When trading a bull flag pattern, traders typically look to enter into a long position when the price breaks out of the consolidation period and resumes the uptrend. The length of the flag pole is usually used to calculate a profit target. However, more conservative traders may choose to use the difference, measured in price, between the flag’s parallel trend lines. Stop-loss is usually set at or just below the lower trendline of the flag.

Check out this article at TabTrader Academy to learn all about take-profit and stop-loss levels.

How to Trade Bear Flag Patterns?

When trading a bear flag pattern, traders typically look to enter into a short position when the price breaks out of the consolidation period and resumes the downtrend. As with the bull flag pattern, a take-profit order is usually placed at the distance of the initial flagpole or the distance measured in price between the support and resistance levels. Stop-loss is often positioned at or just above the upper trendline of the flag.

Flag patterns and pennant technical chart patterns are built and work similarly, however, they are not the same. Both flag and pennant are trend continuation patterns characterized by a period of consolidation after an almost vertical directional price move. The main difference between the two is that a flag features a horizontal channel in the consolidation area, while a pennant has converging trendlines. 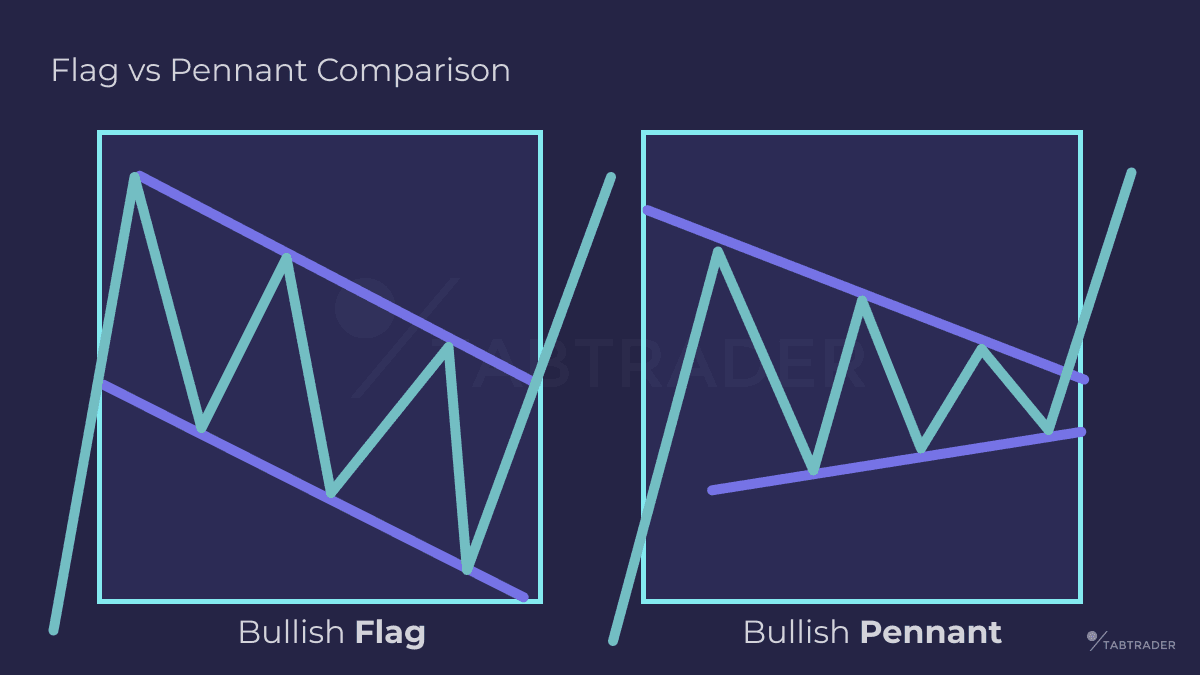 How to Combine Bull and Bear Flags with Other Indicators

When the RSI is near its overbought level, it is often interpreted as a sign that an asset is overvalued and could soon be heading for a downward correction. If this signal is observed at the same time as a bear flag pattern, it can be seen as confirmation of the expected price decline.

When the RSI is near its oversold level, it is often interpreted as a sign that an asset is undervalued and could soon be heading higher. If this signal is observed at the same time as a bull flag pattern, it can be seen as confirmation of the expected price growth.

On the TabTrader app, you can find RSI, moving averages (MA), Bollinger Bands and many more free technical analysis tools that will help you step up your trading. To learn more about how to read and use all the popular technical indicators, read our guide at TabTrader Academy. And if you are interested in knowing which technical indicators are most frequently used by TabTrader users, check out this article on our blog.

To share your queries and other feedback, send us an email at [email protected] or feel free to contact us via Telegram, Twitter or even Discord!